On their journey to Russia, the Breckinridges stopped in London, Paris, and Berlin. In my thesis the journey took just a paragraph and referenced the Steamer letters from my The trip over post as well as a few of letters postmarked London and Paris. Here’s what I wrote back in 2004/2005.

The family arrived in England and spent two weeks in London before crossing the English Channel.[1]  According to her letters to family and friends in the United States, Breckinridge spent most of her time in London and Paris sightseeing and expanding her wardrobe according to the newest European fashions.  In a letter to her sister-in-law, she stated, “while Clifton went to the Embassy [I] went out to look for . . . real English fashion.”[2]  She acquired several garments in London and searched for a designer in Paris to design a series of outfits including a day dress and an evening gown.  She also purchased clothes for her two daughters, Mary Carson Breckinridge and Susanna Preston Lees Breckinridge.  Before arriving in Saint Petersburg, the Breckinridges stopped in Berlin to inquire after a tutor for their daughters.[3]

Again I was so focused on getting them to Russia. So a paragraph would do but there is so much more in those letters. At the time KCB’s statement about searching for “real English fashion” was pivotal. The gown she would wear to the coronation would be designed and made by the English designer Redfern. And I imagine they also looked at Charles Frederick Worth’s London salon. I grabbed that one phase, created a paragraph around it, and forgot about the rest of the letter.

But missed so much detail.

My dearest sister,
I have just finished packing and it is bed time. But I can’t move on without sending a few lines. Your letter and mammy’s came last night and filled my heart full with joy and pain. It seemed to open afresh my grief at parting with you. I hope to hear again at Paris. We have stayed here longer than we expected. Leave in the morning. I want to tell you everything but I cant think of it. We have been going all the time. First shopping, afterwards sightseeing. We have been greatly interested but absolutely worn out. My first impression of London was contrary to all my expectations. When we landed at South Hampton we found there was a special train through to London, and Clifton thought it best to come right on. We expected to get here about three or half past in the morning – But there was a delay of two hours or more about the customs, and before we reached London it was daylight. The seats in the car were absolutely straight and there was no heat. We were cold through and through, and did not get any rest or sleep. When we got here we could find but one cab so early, but all six of us (Sheppie too) piled in and all of our trucks and bundles went on top and one poor horse pulled us to the “Savoy” – The morning was as clear and beautiful as it could be. The sun rose in a bank of red clouds, and there was no suggestion of fog or smoke or anything disagreeable. We drove along a wide street with the river on one side of us and a prettily kept parking on the other to the hotel. For three days the sun show(sic) all the time – since then we have seen London as we read of it. The “Savoy” was very comfortable. Mr. Wilson and Mr. Straws had left word for us to go there – It is beautifully situated overlooking the Thames. But by the time we had eaten breakfast Monday, we determined it would not take many days to break us, so I took a cab while Clifton went to the Embassy and went out to look for (illegible), real English fashion. We moved that afternoon and have been very comfortably located, and have not felt we were going beyond our means. We have seen a good deal, and in a very interesting way. One day a Mr. (illegible) (he is the man who gets up Baedeker’s guide books, and they say knows every inch of London) took us to see “old London.” I cant go over the curious and interesting things we saw. We took lunch, a party of fourteen, in the old banqueting hall of Richard Third. A very quaint and in some respects, beautiful old place. One day another gentleman, who holds the position here that corresponds with our Commissioner of Education, took us all over Westminster and its surroundings. He was perfectly familiar with the history of everything and it was most interesting. We spent one day at Windsor, visited Gray’s grave and now I must say good night. My heart is full of love for each one of you.

KCB’s first Europe letter to family back in the States (in the Breckinridge Family Paper at the Library of Congress) is dated October 11, 1894 from London. This is the only London letter I transcribed from the collection and the only one listed in my inventory.

At the time I transcribed this letter, I questioned the greeting “sister.” KCB was the only daughter of Dr. James Green Carson and his wife, Catharine. CRB had two sisters so I thought it could have been addressed to either of them. But now that I’ve seen James Lees and Susanna Preston Lees’ Wills, I know that the Lees considered a number of younger family members as their own children. Including KCB. So now I wonder if this “sister” KCB refers to in the greeting is in fact one of her Lees siblings. Maybe even Lily from Paris October 15, 1894. At this stage I’m assuming that “mammy” is a familiar for Susanna Preston Lees.

As she mentioned in her previous letter written to her brother on the ship, they landed in England in the middle of the night. Reminds me of modern train travel in the United States. Amtrak drops you in Little Rock in the middle of night – going or coming! If you are headed to Chicago, you catch the train about 11pm (if its on time). And if you are coming from Chicago, you’ll arrive about 5:30am or 6am. Again if it is on time. So you really don’t sleep much. 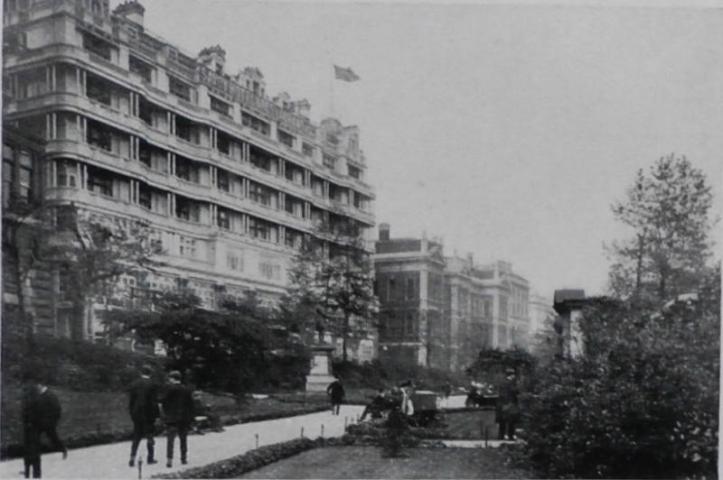 The Breckinridges arrived to a bright and sunny London and she states “my first impression of London was contrary to all my expectations.” But within days, London delivered grey and fog as literature promised. Initially the family check in to the The Savoy. In 1894 the hotel was practically brand new. But apparently it was too rich for KCB’s pocketbook (not surprising as you will discover!). So after one night (maybe two), they moved to another hotel. She says “we moved that afternoon and have been very comfortably located, and have not felt we were going beyond our means.” 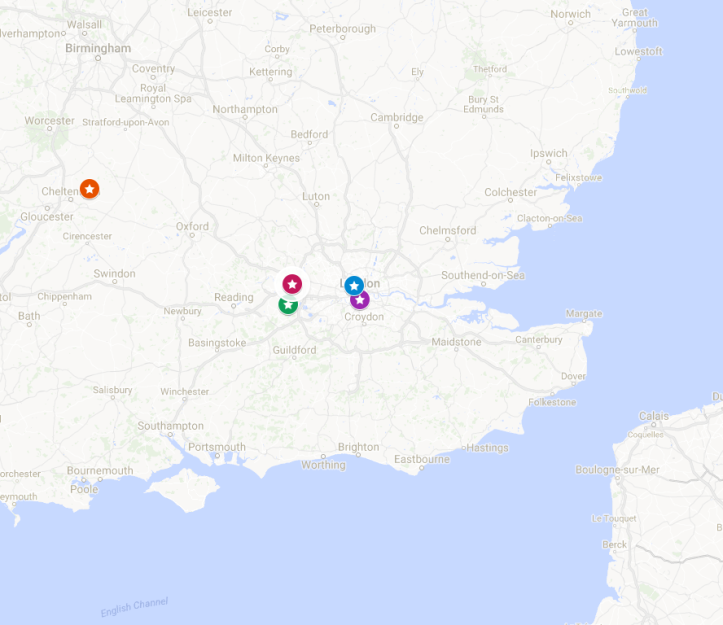 I was so focused on fashion that I missed all the sightseeing in my first read. Old London. Richard the Third’s Banqueting Hall. Westminster. Windsor. Gray’s Grave. I wonder if these were common sightseeing destinations for the 1890s American tourist. I even did a quick Google search for “sightseeing in 1894 London” and “1894 tour of London” and “tourists in 1894 London” to see if any other accounts exist. But no such luck.

I can’t be sure what KCB means by “Old London,” but Westminster (blue star), Windsor (green star) and Gray’s Grave (red star) I’m pretty sure about. Westminster is most certainly Westminster Abbey. Windsor is most likely Windsor Castle. And Gray’s Grave is most definitely poet Thomas Gray’s grave. But Richard the Third’s Banqueting Hall?

A quick interest search of “Richard 3rd banquet hall” lead me to Sudeley Castle (orange star). It is still a popular tourists attraction but it seems to have been in ruins since the mid-1600s. But it’s all the way over near Gloucester. Would an American tourists with only 2 weeks in London with her two young daughters have ventured that far to see some ruins? That’s a little over 2 hours and 112 miles by car today. What would it have been in 1894? And by train or carriage?

And she says “we took lunch, a party of fourteen, in the old banqueting hall of Richard Third. A very quaint and in some respects, beautiful old place.” She refers to this excursion in almost the same breath as the man from Baedeker’s and Old London. So did Richard the Third have another banquet hall closer to London where tourists in the 1890s would have lunch?