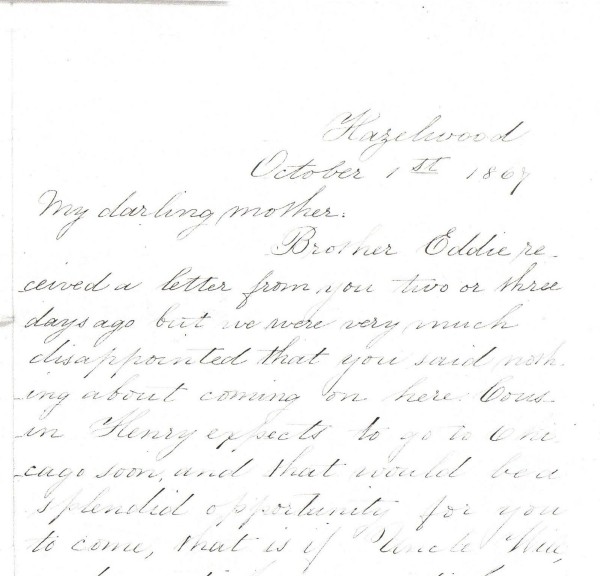 I don’t remember when I first saw the word Hazelwood in print. I don’t think it was from one of the letters, although it is the location on dozens of them. In the beginning I was so focused on the dress and the Russia stuff. In the first paper I wrote about Breckinridge, I use letters KCB wrote to her aunt who lived at Hazelwood but those were all listed as originating from Saint Petersburg. I never saw the word HAZELWOOD or even the location NEW YORK CITY.

At some point I discovered that KCB’s aunt – her primary correspondent during the Russia years – lived in New York City at a place called Hazelwood. By the time my thesis was finished and bound, here’s what I knew. Hazelwood was located in Highbridge in present day Bronx. I wrote the following paragraphs for my thesis.

In numerous letters written during July and August 1865, Catherine Waller Carson’s family in Chicago and New York implored her to move North until the South stabilized.[1]  In a letter dated August 11, 1865, Susanna Preston Waller Lees, Carson’s sister, wrote “our brothers say that you must let the negroes alone – take care of yourself and children that is . . . your duty now.”[2]  The family at Hazelwood, the Lees’s estate outside New York City, wrote to Carson again on August 13, 1865 when they had not received word from her.  Written by Carson’s brother Henry Waller and signed by all the Waller brothers, her sister Susanna Lees, and Lees’s husband James, the letter explained

under the laws of Congress and the Proclamation of the President, your whole estate is in danger of confiscation.  Your first attention must therefore be promptly given to save your property by securing the Executive clemency.[3]

Carson did not heed her family’s advice regarding the safeguarding of her property, but she agreed to send her daughter, Katherine, to Hazelwood for education and safety.

By Christmas 1865, Katherine Carson Breckinridge arrived in High Bridge, New York.[4]  The Lees’s family home, a sprawling country estate on the banks of the Harlem River, was located just outside of New York City and provided Breckinridge with educational and social opportunities unavailable to her in the Reconstruction-era South.

The majority of letters from this early period in KCB’s life (1865 to 1870) are addressed from Hazelwood rather than a specific town or city. Same is true for the letters from Airlie Plantation. At some point I connected Hazelwood to the place Highbridge. I don’t know if it was on a letter or not. Maybe it was on some letter I can’t put my hands on at the moment. I do know that Highbridge was written as one word and sometimes it was written as two words (High Bridge). And then other times it is referred to as Highbridgeville. But Hazelwood remained a mystery of sorts for the next 13 years. I imagined it as grand house on a grand boulevard. Every once in a while I’d do a Google search for Hazelwood, High Bridge, and Bronx but nothing.

In my history dream world, I’d die happy if I found a drawing or photograph of the house. But I’d settle for a map or another document of any kind with the word Hazelwood and/or Lees. When I started the process, I don’t know anything about the geography of New York City and I really don’t know anything about the geography of 1860s/1870s New York City, so I didn’t even know where to start looking or who to ask. Around 2004 I emailed the New York Public Library Map Division with my Hazelwood questions. I’m still waiting for an answer. And if I log into to see the status of my questions, it says PENDING.

So Hazelwood was in New York City. And I knew that High Bridge referred to the area around the High Bridge Aqueduct in the borough of modern-day Bronx. I located James Lees and his wife Susannah Preston Lees in the 1860 and 1870 Census and they are listed as living in the township of West Farms in the county of Westchester, New York. In 1860 the post office is listed as Mount Vernon and in 1870 the post office is listed at Tremont. In the 1900 Census, Susanna Preston Lees is listed as a widow and the township is listed as the Borough of the Bronx. She died two years later and I couldn’t find the death record of James Lees (more on that later).

So where is Hazelwood? This was not a small wood frame house. Armed with more specifics then 13 years ago and greater access to Ancestry at the library, I started to really get my hands dirty!

About a year ago I found James Lees in the 1855 New York City census. This census from the First Election District of the 18th Ward of New York lists the house as stone and value of $19,000 (that’s $616,000 in today’s money). The majority of the other houses around it are listed as brick and value of $10,000. The entry above James Lees is Robert Colgate. His house is valued at $90,000. Colgate? Like the toothpaste? I’ll have to look into that later. 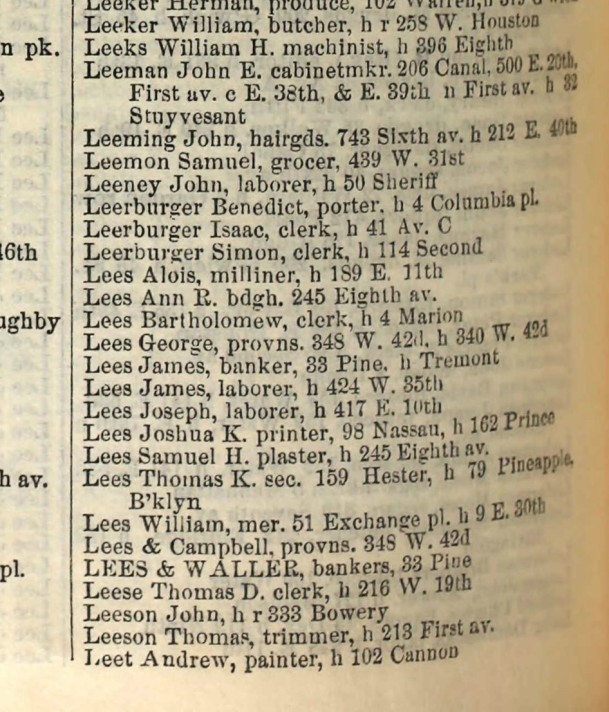 In this 1867 City Directory, James Lees is listed and his home is listed as Tremont. But where is Tremont?

And then in 1874 – again from a City Directory – Lees is listed in High Bridge. Lees died in 1873 but his name was still on the bank (Lees & Waller) and his wife was still living. In 2004 I didn’t have the time (or probably the patience) to figure out when James Lees died. There are a lot of James Lees in the 1860s New York. It was a common name and figuring out which James Lees was the banker married to Susanna Preston Waller was more than I had the time to do when I was trying to get down with my thesis and graduate. Plus at the time it was all on microfiche or microfilm and who has time for that?

So in 1867 Hazelwood was in Tremont and by 1874 Tremont was called High Bridge. But the name Hazelwood was the same in all the letters during this seven year period. I think it is safe to assume that New York is growing and expanding. Neighborhoods or towns are dividing and becoming new places.

Still no map! Still no visual of what the place looked like. I know it is a stone building valued at about $19,000 in 1855. But no idea what the structure looks like.

Then I found this. A 1876 City Directory! Yes, James is dead but Aunt Lees is still very much alive! And there she is!

Now I had a borough, a couple of section names and finally a street name. With this information, I could start looking at maps with real purpose. The New York City Public Library has maps including Sanborn maps of the area for the last quarter of the 19th century.

To give you some geographic perspective here is a larger map of the area from 1872. At the bottom of the map is the top of Central Park and Harlem? Then follow the Harlem River (that’s the river in the middle between the big words CITY OF NEW YORK and MORRISANIA) and count four bridges. The fourth bridge from the bottom is the High Bridge. 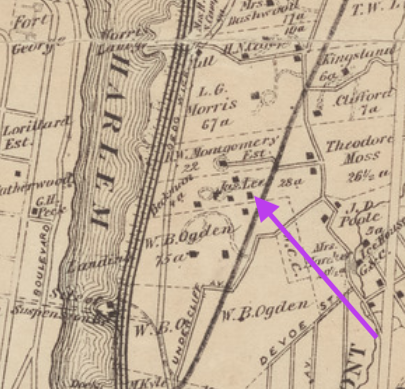 And there it is! It may not be a picture of the house or the word Hazelwood but on November 4, 2017 I was super excited about this discovery.

The same day I found this 1872 map and even though the name doesn’t have the S, I’m pretty sure this is Hazelwood. I mean I forget Ss all the time and I’m always figuring to make word negative. Typos happen!

Still with me… cause it gets better.

Last summer the library had a historic map trial. This may not seem to be a big deal but just wait. Historic maps in a searchable, zoomable format at incredible tool for historians. I hope that what I’ve just shown you makes that clear. But there are different levels of old maps. And to me the Holy Grail are Fire Insurance maps. Why you ask? Well Fire Insurance maps are more than just road names, waterways and a few building outlines. Fire Insurance maps tell you what the streets are paved with, how many stories the building have, what the roof is made of, and so much more!

So last summer the library had a free trial of the historic map tool. Most libraries subscribe to something like this but usually they only subscribe to a small portion of the service. For instance the local library here is only going to subscribe to the Arkansas maps. And those are great and I get that they are the maps most people in Arkansas are interested in but my research is more than Arkansas. It’s New York and DC too. But during the trial, I was able to play with all the states! And here’s what I found along the Harlem River.

This 1885 map not only lists Mrs. S. P. Lees (instead of Mrs. James Lees) but it shows the structure and pathways/roadways on the property. And the homes of their neighbors. Look at the Estate of William B. Ogden and the size of his house! 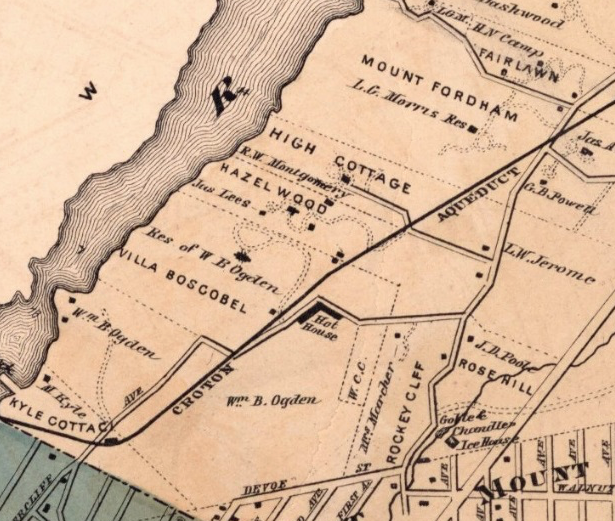 It may have taken more time than I wanted it to but finding these maps and having a visual idea of where the house was and what it might have looked like is a huge triumph!  I haven’t given up on finding a drawing or picture of the house but this will satisfy my curiosity for a little while at least.