one of the benefits of owning a yarn shop was i had somewhat unlimited storage! and most of my UFOs lived at the shop. so when i closed the YARN mart in july, all that stuff came home and it needed to a place to live! here’s my UFOs bucket! as i cleaned out the shop space, all active UFOs were thrown in this bucket for later sorting! well the time has come…

there was stuff in there that i had completely forgotten about or didn‘t remember at all! then there were projects that i thought i had lost and now they are found!!! one of the other things about owning a yarn shop is that you don’t really knit for yourself anymore. i mean don’t get me wrong! i loved all the yarn i sold and i loved the patterns we promoted but it’s different than knitting for yourself!

needless to say i had some frogging to do! and just like my house purge and stash purge, i used the konmari method of organizing this too! if the project sparked joy in my hands, it was a keeper. if not i ripped it! 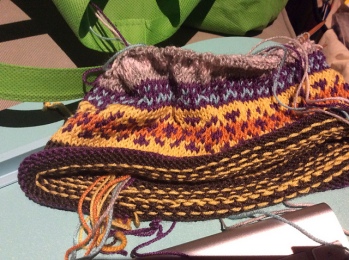 these three projects are keepers. the slouchy fair isle hat (left) with liberty wool paints from classic elite yarns! man, i love that yarn!!!! it’s a fair isle hat using two multi colors. but my tension is really bad – lots of pucker! so i’ll probably end up ripping and starting over! then stephen west’s aurora expanse (center). i used lux adorna knit’s fun size dk in cashmere. i did a two color brim (dark grey on the inside and medium grey on the outside). and finally the vogue fair isle cowl (or #28 mobius cowl from winter 2013/2014 vogue knitting). this pattern got a lot of attention when it came out. it called for koigu kpm and kpppm but i decided to use spud & chloe fine instead (it was what i had on hand!) 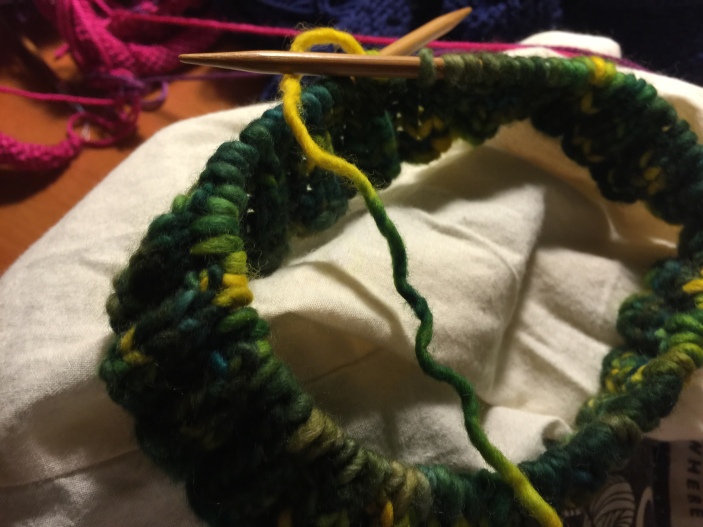 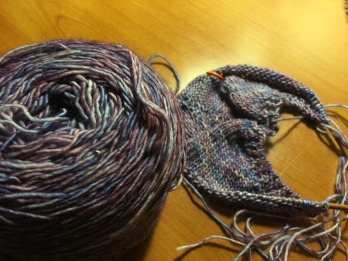 and these are three projects that didn’t make the cut! the bankhead hat (left) was super popular a few years back and we had a lot of this green/yellow variegated manos del uruguay maxima, so i thought it might be a match made in heaven. not so much! the mentolat (center) was also a super popular pattern! i started it in swans island natural colors merino worsted. and i loved the yarn and the pattern but it wasn’t something i’m going to wear! swans island is too nice to be in a project that i’m not going to wear so it got frogged! same with stephen west’s pogona. i had a skein of madelinetosh tosh merino light that i loved and i searched for a pattern i would equally love! pogona is a great pattern but the yarn and the pattern just didn’t go together. so out it went!

the stress of too many UFOs is less than it was! and i’m tackling them left and right! i’ve still started few new project in the last month but i’m getting things finished!